Travel is one of the main ways AMR spreads and is why this issue has such intense global implications. As a traveler, whether you travel for work, leisure, or any other reason, knowledge of AMR is essential to keep both yourself safe while in your destination country, but also to ensure you minimize the risk of spreading drug-resistant bacteria when you return home. 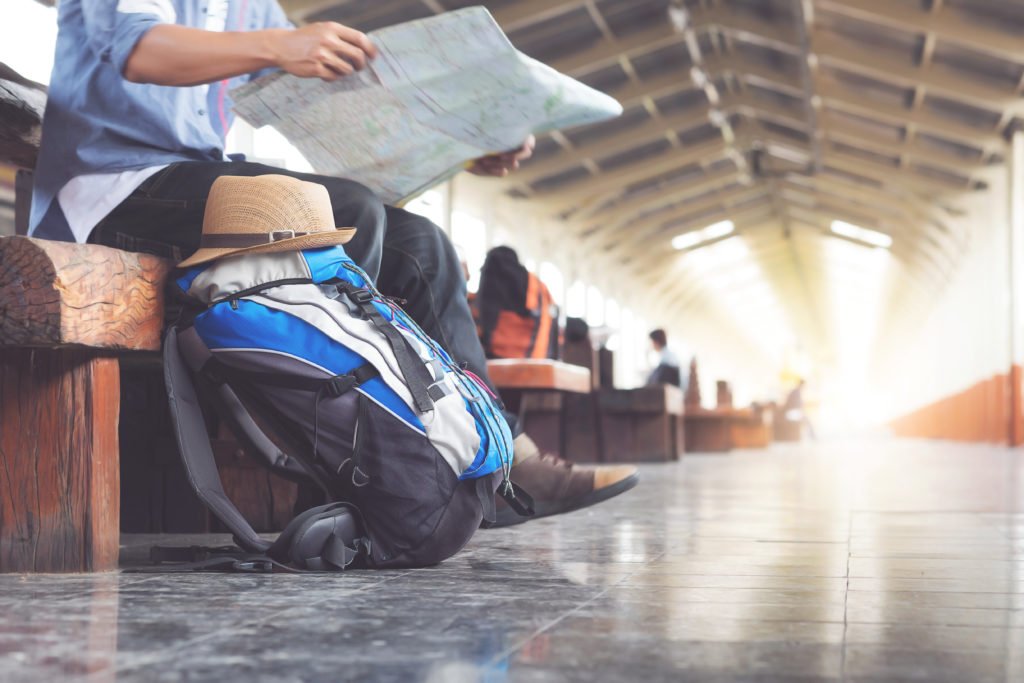 A Swiss study demonstrated that 75% of 38 tourists travelling to India returned home with antibiotic-resistant bacteria in their guts. In addition, 11% of tourists had bacteria resistant to the last-resort antibiotic colistin (Bernasconi O, et al. 2016). While bacteria can spread via the objects you touch or the people you come into contact with, the food choices you make also have a significant impact on the spread of resistant bacteria. Many countries still use antibiotics indiscriminately in animal husbandry; overuse and unnecessary use of antibiotics in the animals we eat increases the risk that antibiotic-resistant bacteria will develop and be passed on to humans through meat or products such as milk and eggs.

If you begin to feel sick while abroad it is important to weigh the pros and cons of checking into a local hospital. Hospitals are major hubs for the development of antimicrobial resistant agents, particularly those critical for human health. Even in countries with advanced healthcare systems, hospital acquired infections or hospital associated infections (HAIs) are still prevalent. HAIs are defined as “an infection acquired in hospital by a patient who was admitted for a reason other than that infection” (WHO, 2002). Worldwide approximately 1.4 million people are suffering from an HAI at any given moment; the highest frequency of HAIs is reported in the Eastern Mediterranean and South-East Asia regions (WHO, 2002).

HAIs are one of the leading causes of death in hospitals; on top of that, survivable infections increase the time spent in the hospital to an average of 8.2 days following an infection acquired after surgery (WHO, 2002). For countries without universal healthcare this can lead to devastating economic costs in addition to the physical suffering endured.

Klebsiella pneumoniae is an opportunistic pathogen that can cause respiratory and bloodstream infections in humans; new research has discovered antibiotic-resistant strains of this bacteria are rapidly spreading throughout hospitals in Europe. Certain strains are already resistant to last-resort carbapenem antibiotics, meaning these strains are considered to be extremely drug resistant (XDR) (Nature Microbiology, 2019).

Colistin is used very sparingly in humans as it can cause kidney failure; however, when no other antibiotics have been effective, colistin is an important last resort (AMR Review, 2016). Widespread use of colistin in animals has led to resistance in animal pathogens which has concerning implications for human health. A recent study in China has shown the discovery of transferable colistin resistance in bacteria in both humans and animals (Yi-Yun Liu et al., 2016).

As standard treatments grow increasingly ineffective, infections are becoming more difficult or even impossible to control. This will only increase the number of infections worldwide and drastically compound the problem. The risk of fatality increases when combined with the fact that illnesses will now be more prolonged and hospital stays will also become longer as resistance spreads (WHO, 2014). Information on over-the-counter antibiotic sales are difficult to obtain in many countries and in those where data is available, information is often inconsistent. In the EU, the European Union Council recommended that antibiotics should be used as prescription-only medicines in member states (2002/77/EC); despite this, Some areas in Southern and Eastern Europe consume between 20% and 30% of antibiotics without a prescription (Morgan et al., 2011) (AMR Review, 2016).

Deciding to go to a hospital

Before you travel it may be useful to check the following maps to see if your destination has a high rate of resistance to the bacteria Escherichia coli and Klebsiella pneumoniae. These two bacteria are by no means the only infectious bacteria that can be resistant to antibiotics, but they are a good indicator to determine the risk of encountering antibiotic-resistant bacteria during your travels.

Please note that countries in white have no available data. 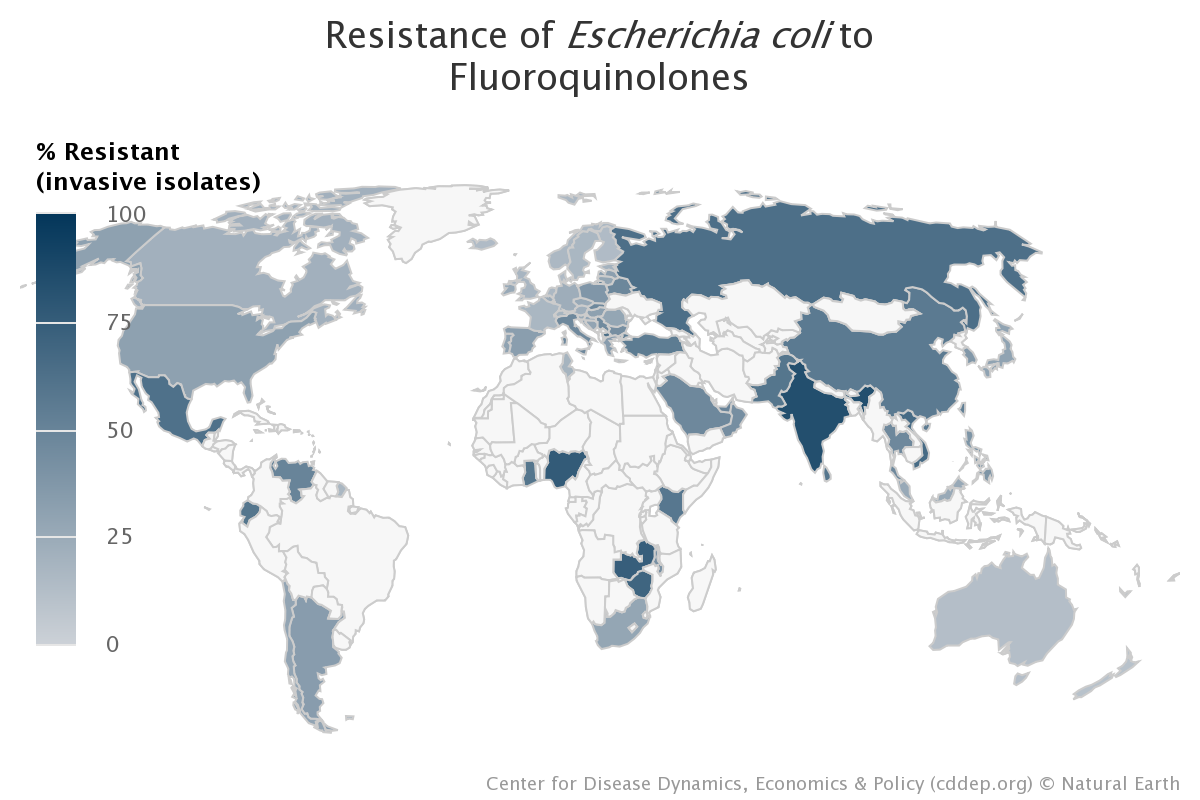 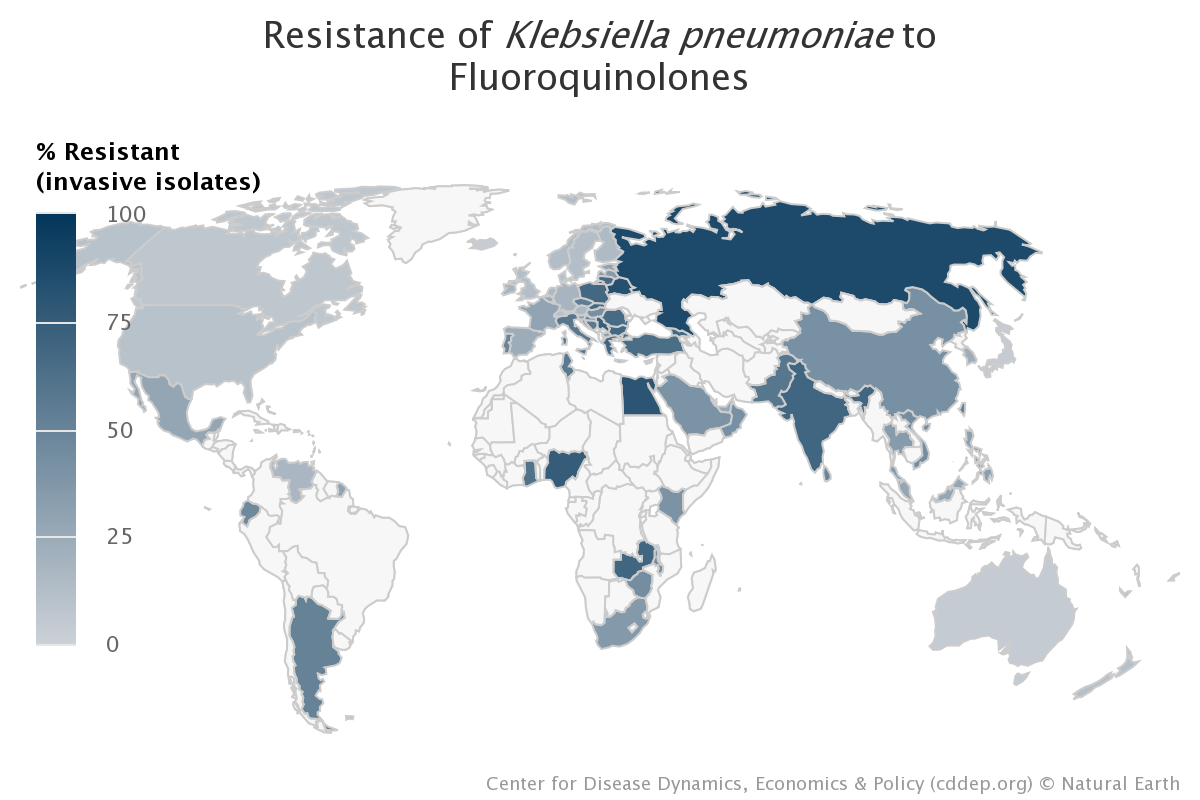 Source: Figures courtesy of the Center for Disease Dynamics, Economics and Policy. Used with permission via Creative Commons license.

If you would like to find more information about specific resistance rates we encourage you to visit the CDDEP.