A key part of your job is caring for the health and wellbeing of your animals and crops. As such, antibiotics are often a routine decision to prevent and treat illnesses and infections. How you use antibiotics has a great impact on the development of resistance. Find out the safest ways to use antibiotics and more information on how you can combat AMR here: 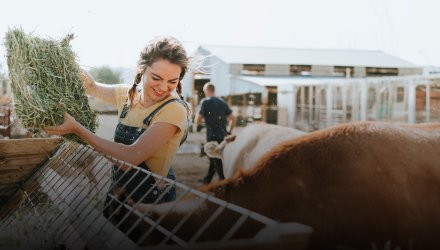 AMR is the ability of microbes (such as bacteria, viruses, fungi) to counteract the effectiveness of antimicrobial drugs (such as antibiotics, antivirals, antifungals) against them. Even when antimicrobials are used appropriately, microbes can develop resistance. However, the development of resistance is accelerated by their misuse and overuse in human, animal, and plant health along with the pollution of the environment with antimicrobials and antimicrobial resistance genes.

Drug-resistant infections already claim at least 700,000 lives a year, including 230,000 deaths from drug-resistant tuberculosis (WHO, 2019). By 2050 resistant infections could kill 10 million people annually and lead to an economic slowdown comparable to the global financial crisis of 2008. As life-saving antibiotics stop being effective, AMR could end our capacity to combat infections.

Antibiotic usage in animals is an imperative factor contributing to the wider range of resistance, particularly with intensive animal production. The spread of resistant bacterial populations can be transmitted from animals to humans via direct contact between the two, or through the food chain and the environment. WHO recommends an overall reduction in antibiotics usage within food-producing animals to help preserve their effectiveness for human medicine (WHO, 2017).

Antimicrobials are critical for animal health, welfare, and food security when used to treat infections in agriculture and aquaculture. However, infection treatment is not always the leading reason for antimicrobial use; globally, antimicrobials are used most often to prevent infections, compensate for poor husbandry practices, and/or to promote growth (AMR Review, 2016; Landers et al., 2012). Although data on the exact amounts of antimicrobials used in global food production is deficient or completely absent in certain areas, the data we do have paints a serious picture. In the US for example, more than 70% of antibiotics considered to be medically critical for human health are used in livestock (AMR Review, 2015). Research predicts that this high level of antibiotics in agriculture will only increase without intervention; globally, consumption is expected to increase by 67% from 2010 to 2030 while consumption in BRICS countries (Brazil, Russia, India, China, and South Africa) specifically is predicted to rise by 99% over the same 20 years (Van Boeckel et al., 2015).

When an infection has not responded to other drugs, last resort antibiotics may come into play; the frequent use of these last resort drugs in livestock can rapidly increase the threat of AMR and impact our ability to continue to use them effectively in human medicine when they are routinely absorbed in low levels through the food chain. Colistin is used very sparingly in humans as it can cause kidney failure; however, when no other antibiotics have been effective, colistin is an important last resort (AMR Review, 2016). Widespread use of Colistin in animals has led to resistance in animal pathogens, which has concerning implications for human health. A recent study in China has shown the discovery of transferable colistin resistance in bacteria in both humans and animals (Yi-Yun Liu et al., 2016).

Animal husbandry presents a multitude of problematic antibiotic use practices ranging from growth promotion to both metaphylactic and prophylactic use. Metaphylactic use attempts to prevent infections spreading from sick animals to healthy ones. However, in practice this only aids in the development of antibiotic resistance by adding large, unnecessary quantities of antibiotics to animals and the environment. (AMR Review, 2015). Despite using antibiotics to attempt to reduce disease spread, it is often difficult to avoid due to cramped conditions which expounds the problem. Growth promotion is seen as the most egregious non-therapeutic use of antibiotics, as such the practice was banned in the EU in 2006 (REGULATION (EC) No 1831/2003); however, it is still allowed in the US and other countries around the world.

Are there alternatives to antibiotics in husbandry?

The first steps towards reducing antibiotic use in husbandry are improving hygiene and making changes to animal housing and other husbandry practices (WHO, 2017). Otherwise, there are a number of alternatives to antibiotics; these include vaccines, prebiotics, pro-biotics, in-feed enzymes, antimicrobial peptides, bacteriophages, heavy metals, and more. All of these alternatives have different levels of efficacy and target growth promotion and/or disease prevention and/or disease treatment (PEW, 2017).

Vaccines are the most prominent and widely used alternative to antibiotics as they pre-emptively introduce either an attenuated or killed version of the bacteria to the animal. In turn, the animal develops resistance and will be able to prevent later infection by itself (Frontiers in Microbiology, 2014).

Bacteriophages are viruses that act as parasites to bacteria by infiltrating them and then replicating once inside; in time, this kills the bacteria. This method has a number of advantages; for instance, it is highly specific to particular bacteria and will not harm helpful local bacteria in animals. Additionally it replicates inside the target bacteria meaning the injected dose is low (Frontiers in Microbiology, 2014).

Another alternative includes improving the immune system of the animal to encourage a more effective response against bacterial infection. This can also be used in conjunction with antibiotics to increase the treatment’s efficacy. At the moment, only a few bacteriophages are allowed on the market and only as post-slaughter decontaminants. One example is a phage that kills Listeria in food post-slaughter (Frontiers in Microbiology, 2014).

Does antibiotic use in farm animals contribute to the spread of resistant bacteria?

Even though human medicine is currently considered by the EU to be the primary source of resistant bacteria in humans (EMA, 2018), antibiotic usage in animals is a key factor contributing to the wider range of resistance. Its effect is particularly pronounced in intensive animal production. The spread of resistant bacterial populations can be transmitted from animals to humans via direct contact between them, or through the food chain and the environment. Additionally, transmission can also occur through the introduction of animals from other farms.

Antimicrobial-resistant infections in humans can cause prolonged illnesses, increased frequency of hospitalization, and treatment failures that can prove fatal. Some types of bacteria that cause serious infections in humans have already developed resistance to most or all of the available treatments and we are quickly running out of treatment options. WHO recommends an overall reduction in antibiotics usage within food-producing animals to help preserve their effectiveness for human medicine.